Florida Moms Continue to Point Out Dangers of Common Core

October 31, 2014 Karen Effrem
Lake County mothers are continuing to take up the challenge of explaining to Governor Scott the very real dangers of Common Core and the distress to their children.  Here are some photos:

Christine Morris Magnifico was at one of Governor Scott's campaign stops in Lake County showing him second grade homework biased toward global warming and the following letter from a third grader to his teacher: 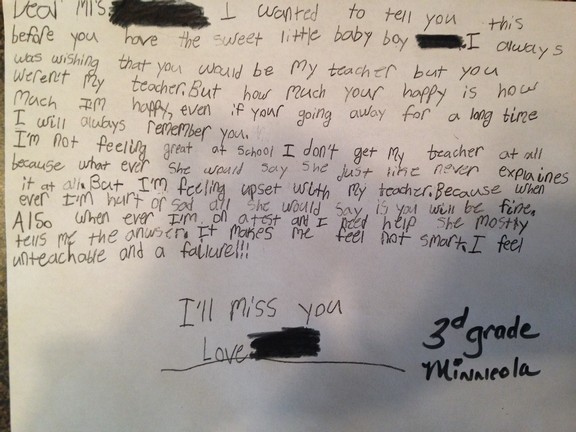 Particularly sad are the last three sentences that say:
"Also, when ever I'm on a test and I need help, she mostly tells me the answer.  It makes me feel not smart.  I feel unteachable and a failure."

While not presented to the governor, here is a picture of another very sad  note written by a young child suffering the cinfusion, despair, and loss of the joy of learning caused by Common Core to his/her mother. 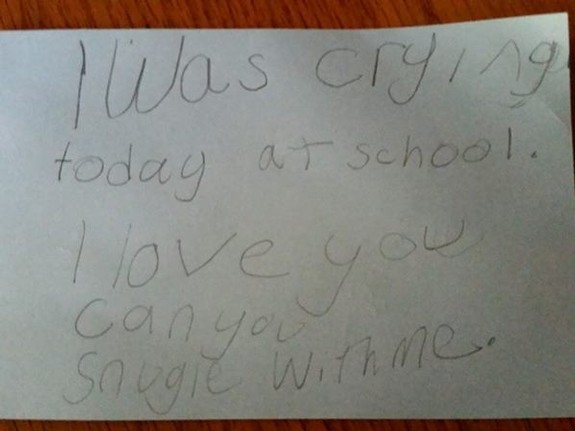 Here is a set of quotes from parents and teachers at a Palm Beach Post article from a meeting of the Palm Beach County School Board to listen to concerns about the Common Core/Florida Standards:
Hours to prep for computerized testing of kindergartners. "I watched a student suffer for over an hour. They had no idea how to work the computer mouse."  Five teachers, working one-on-one with students got only 10 of 120 students done in one school day. "That night I went home and cried."   Chris White, teacher at a Title 1 elementary school

Children don't know the language what's 'drag and drop' to a child who's not worked on a computer? . The books were designed to go with one test, we're using another. Karla Yurick, 5th grade math teacher

"I can't sign on. This just crashed. I can't highlight." things heard in one teacher's middle school classroom when students attempt online testing.

"They're actually calling this Common Core disorder," says parent Tammi Haber. She adds "Solving a simple math problem in 15 steps. What's the point of that? "
"I was never tested and I was just fine," parent.

"Every single day my little boy comes home: I'm stupid. I'm an idiot. I'm useless because I didn't do good on this assessment test." mother of son in third grade. Also, "He begs me, mommy, please home-school me... His anxiety level at 8 years old is through the roof. He's so afraid he's not going to pass."

"He's so stressed, he's so disengaged. He's miserable. We have done nothing fun for any weekend" since school began Tina Blauvelt, mother of 4th and 8th graders. The eighth grader excelled in seventh-grade math, and on last year's FCAT. This year, in algebra and failing.  "They took the kid right out of the kid," says Bruce Blauvelt.