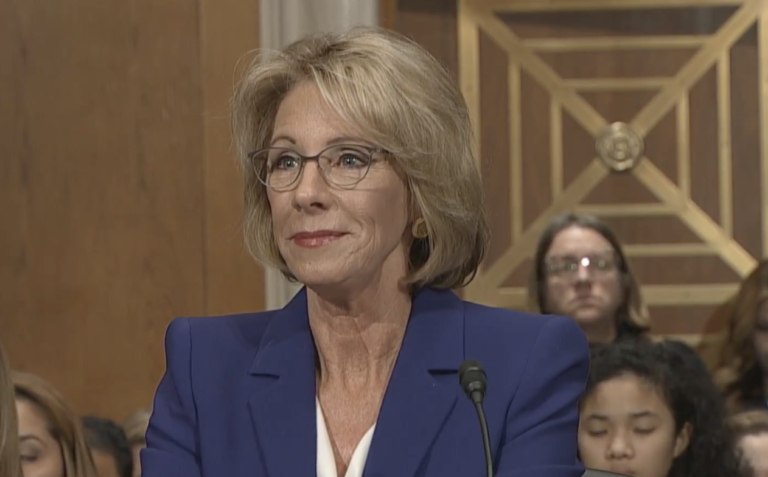 I strongly agree with Shane Vander Hart at Caffeinated Thoughts that Betsy DeVos' confirmation hearing to be Secretary of Education was not terribly informative. Aside from a brief mention of Common Core by Senator Cassidy (R-LA) where she said she wouldn't mandate it from the secretarial level and her answer to a question from Senator Alexander (R-TN, chairman of the HELP Committee holding the hearing) that she wouldn't implement school choice from the federal level, none of the major concerns in our national parent coalition letter about Common Core, privacy, and school choice were asked or answered.

Here is a brief discussion of several issues that did come up and those that should be closely monitored during her control of the U.S. Department of Education:
Common Core  Mrs. DeVos answered Senator Cassidy's brief yes or no question, that she would not continue Common Core from the federal level. it is interesting that she said in her prepared opening statement:


And every teacher in America dreams of breaking free from standardization, so that they can deploy their unique creativity and innovate with their students.
If she wants teachers to "break free from standardization" how is it that she has supported national standards and standardized tests that require "standardized" teaching for so long?
However, as stated in numerous writings by many anti-Common Core experts and activists, the foundation of the Every Student Succeeds Act mandates the Common Core by imposing secretarial veto of state plans and requiring states' compliance with eleven different federal laws all mandating statewide standards and tests that are Common Core even if not labeled such. How she implements ESSA will be critical.

Federal School Choice  While it was somewhat reassuring that she said that she would not support a federal school choice law,  her answers about wanting accountability combined with her record of support for very regulated voucher plans in Indiana and Louisiana that require administration of the state (Common Core) tests along with that strong push by her allies John Engler of the Business Round Table and Michael Petrilli of Fordham as well as most of the Democrats is extremely concerning for the autonomy and viability of private schools. Education freedom groups across the nation, including Education Liberty Watch, Eagle Forum and the Cato Institute are all very concerned.

Implementation of ESSA
Data Privacy  This topic did not come up during the hearing. Betsy DeVos  chaired the Philanthropy Roundtable, which published a report called Blended Learning: A Wise Giver's Guide to Supporting Tech-assisted Teaching that lauds the Dream Box software that "records 50,000 data points per student per hour"
Preschool  Senator Isakson (R-GA) made the following very alarming statement during the hearing (1:02:55):


"She [Senator Murray] talked about her goal and my goal which we've shared with each other, that is to work toward requiring 4 year old prekindergarten for every student in the country..." (Emphasis added).
Thankfully DeVos demurred with her standard, "If confirmed, I look forward to working with you on..." statement. However, given how ineffective, harmful, invasive and expensive these programs are, including in Georgia, expanding preschool like this would be a "disaster" of Trumpian proportions.

GLBT issues  This was a key issue pushed by the Democrats and while we agree with her that no student deserves discrimination or harassment, we would have felt much better if she had also said that she also cared about protecting the First Amendment free speech, freedom of assembly and religious rights of all students and families. It will be important to see how she deals with the Title IX guidance.

Guns in Schools   Her response on guns in schools satisfied no one. While right that it is a states' issue, the "grizzly bear" response was quite ineffective. Far more satisfying would have been a mention that almost all school shooters have been on psychotropic medications at the time of their crimes, including Knewtown, Connecticut, the home state of Senator Murphy (D). These drugs have the well-known side effect of violent, murderous reactions in certain individuals and that guns in the hands of responsible concealed permit holders would likely reduce the carnage in these incidents as it did in Pearl, Mississippi and other mass shootings.

What's Next  Betsy DeVos was required to have her letter from the government ethics agency documenting that she would serve with no financial conflicts of interest by the end of today as President-elect Trump takes the oath of office in order to have her committee confirmation vote on January 24th. We will see if that happens and what comes next. Please consider contacting the Senate HELP Committee members and your own senators with the concerns we have listed.

January 19, 2017
School choice is becoming a very hot topic in education circles with the likely ascendancy of Betsy DeVos to the position of Secretary of Education in the new Trump administration.  Because so many are pursuing the noble goal of trying to help poor children escape from failing public schools, they do not or will not see the dangers of these programs to private and even home school autonomy.
Education Liberty Watch has been trying to warn of these dangers for several years and is honored to be working beside tremendous organizations like Eagle Forum and the Cato Institute to raise this alarm.

In 2012, we published the School Choice Freedom Grading Scale. States like New Hampshire and Georgia that had accountability directly to parents scored A+ grades while states like Indiana and Louisiana that imposed the state standardized tests on entire private schools received failing grades.

The ever brilliant education analyst and conservative icon Phyllis Schlafly instantly understood the dangers of both Common Core and these alleged school choice plans to private school autonomy. Shortly after having the honor of presenting our Grading Scale at her wonderful 2012 Eagle Council meeting, she wrote these insightful words in her weekly column, titled Like ObamaCare, Obama Core Is Another Power Grab:

The Obama Core advocates are even planning to impose their standards on private schools. As the school choice movement grows, the attempt will be made to force any private or charter school that accepts public funds to adopt Common Core standards and have their students take the national tests. (Emphasis added).


President-elect Donald Trump's appointee to become the next Secretary of Education, Betsy DeVos, is undergoing her confirmation hearings starting on January 17th. Despite protestations to the contrary, the Michigan billionaire has a long history of supporting Common Core and other education debacles like social emotional learning (SEL), data mining, and charter schools that only teach and test the Common Core.

As pointed out in our list of questions that the U.S. Senate should ask DeVos, she is a strong proponent of both voucher programs and Title I portability. The Indiana voucher law that she and her organization, the American Federation for Children (AFC), strongly supported and funded requires voucher recipient schools to administer the public school Common Core-aligned tests  and submit to the grading system based on those same Common Core-aligned tests.  The tests determine what is taught, which means that this law is imposing Common Core on private schools. Indiana "is the second-worst in the country on infringing on private school autonomy" according to the Center for Education Reform because of that and other onerous requirements, and the state received an F grade on our Grading Scale. It is also important that she be asked if as Secretary of Education, if she would require the same public school, Common Core tests and the rest of the federal regulations for private schools under a Title I portability program as her close friend  and colleague Jeb Bush recommended for Mitt Romney in 2012 (p. 24).
Jason Bedrick of the Cato Institute raised similar concerns in 2014 after Michael Petrilli of the Gates-funded, pro-Common Core Thomas B. Fordham Institute put out a policy "toolkit" demanding that Common Core tests be imposed on any educational entity receiving tax dollars. Bedrick responded well by saying:

In fact, Fordham's preferred policy is undermined by a large body of evidence. A 2009 literature review of the within-country studies comparing outcomes among different types of school systems worldwide revealed that the most market-like and least regulated education systems tended to produce student outcomes superior to more heavily regulated systems, including those with a substantial number state-funded and regulated private schools. In short, the best form of accountability is directly to parents, not government bureaucrats and their tests.

Accountability Should Be To Parents
Fordham argues that school choice programs, including both vouchers and scholarship tax credits, should fall under the same accountability regimes as public schools because they utilize public funds. In Fordham's words, "The taxpayer also needs assurances that schools are producing solid learning results for the children who participate in such programs." This reasoning should not apply to scholarship tax credits which, as the U.S. Supreme Court held in ACSTOv. Winn, do not involve public funds at all:

Like contributions that lead to charitable tax deductions, contributions yielding [scholarship] tax credits are not owed to the State and, in fact, pass directly from taxpayers to private organizations. Respondents' contrary position assumes that income should be treated as if it were government property even if it has not come into the tax collector's hands. That premise finds no basis in standing jurisprudence. Private bank accounts cannot be equated with the ... State Treasury.

If private schools are to be maintained as any reasonable alternative to public schools, their already adequate methods of accountability via nationally norm-referenced tests and to parents that pay the tuition should be maintained or no public money should go to private schools at all.
Florida Stop Common Core Coalition, Inc. Florida Stop Common Core Coalition, Inc.