FSCCC is grateful to Cathryn Moering for making the effort to attend the Tampa Standards Hearing and giving the following excellent remarks:

First, I want to thank Dr. Stotsky and Dr. Bauerlein for working on the draft to improve our ELA standards, as well as Dr. Effrem and Keith Flaugh for their work advocating for better standards in Florida. I would also like to recognize the new reading list that was published; it is excellent.

I would like to speak about Florida's proposed math standards. If our goal is to have math standards that will give our students the foundation to successfully pursue a career in science, mathematics, engineering or other related careers in data science then we must benchmark our standards to those that are highly respected like California's 1997 math standards. I will add that the underpinnings of data science involve quite a bit of applied mathematics. But back to standards, California's 1997 standards, according to an article published by Stanford University's Hoover Institution, were "written largely by the faculty of the Mathematics Department at Stanford University..."

We not only look toward giving our own children the best, we also must consider the education we are providing for our citizenry as a whole, those who surround us and those we lean on to make contributions to our society and to our country.

Taking a quick look over the proposed K-5 math standards I have concerns with multiplication and division math standards proposed for 4th and 5th grade (specifically section MA.4.NSO.2 and 5.NSO.2). I noticed we are proposing our students become proficient in performing these specific math standards an entire year later than in California's 1997 standards, which presented almost identical standards in 3rd and 4th grade, not 4th and 5th.

But more importantly, the current draft has attached to the end of many math standards "using a variety of strategies". This language has resulted in students having to practice so many different strategies on multi-digit multiplication and/or division problems that the students are not becoming proficient in any one method, let alone the most efficient method: the standard algorithm. Students often become confused by all the strategies and are left with no single strategy to cling to that enables them to solve these problems efficiently and with proficiency. What I have seen is the child struggles to keep up the following year.

Before moving forward with these standards, we need to take a closer look at what has been proposed in math and make changes that include a full Algebra I course in 8th grade.

Posted in Common Core in the Culture. 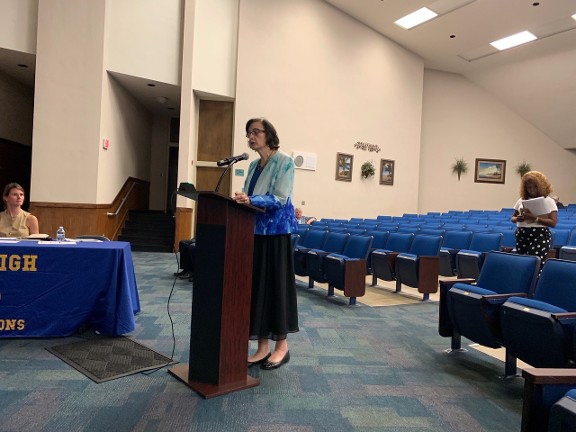 Good evening! I am Dr. Karen Effrem, a pediatrician serving as the executive director of the Florida Stop Common Core Coalition. Thanks to the Department for your hard work in carrying out Governor DeSantis' great executive order to end Common Core, which has been shown in state and national research to be an educational disaster, chiefly harming poor and minority students.

Our strongest preference would be that the standards of high performing pre-Common Core states replace these fundamentally flawed standards. The second draft seems to be a great improvement over the minor tweaking that took place in 2014, but not yet that replacement.

Progress is however being made. Some of the developmentally inappropriate standards have been moved to their proper places in both subjects. We are delighted to see that use of the standard algorithm in math moved two years earlier compared to Common Core.

• Making sure there is far greater emphasis on procedural fluency instead of communication, collaboration, and effortful learning
• Not overusing the variety of strategies concept
• Making sure that the lower grade level math is properly sequenced and leads to a full Algebra I course by the end of 8th grade to allow those that want to pursue STEM careers to be able to complete calculus by 12th grade.

In English, there has been great improvement in the literature list. Remaining work includes:

The developmentally inappropriate standards still need more repairs in both subjects. There is still time. Please keep up the great work. Thank you!

More listening tour stops will be announced for the 3rd draft in early December to include South Florida. Please attend or send comments to standardsreview@fldoe.org.

Posted in Problems of Common Core.