The evidence on the New Jersey Department of Education website and in the state media, however, tells a completely different story.  Although Christie should be commended for signing two bills that pare back testing for grades K-2 and does not penalize districts for having high numbers of students that opt out, the Garden State is still a member of PARCC, the national Common Core testing consortium:

The review panel reviewing the standards wants to keep the PARCC and actually make it a graduation requirement, which would negate the bill described above, that does not penalize districts for opting out.  It would greatly harm the possibility for parents to actually use their inherent, God-given right to direct the education of their children, including by opting them out of state tests. The axiom that what is tested will be taught holds true.  If New Jersey is testing Common Core, they will be teaching Common Core.

Regarding the standards themselves, the department seems poised to keep 84-85% of Common Core.  This is the magic number that is required in the Race to the Top contracts each state signed that clearly required Common Core. The relevant text from Florida's contract says:


"The goal is to have a common core of state standards that states can voluntarily adopt. States may choose to include additional standards beyond the common core as long as the common core represents at least 85 percent of the state's standards in English language arts and mathematics." (Race to the Top Contract, p. 92, emphasis added)

So, as in Florida, the review panel is recommending that New Jersey still keep the bulk of the Common Core standards to remain within the RTTT contract. The NJ commissioner of education plans to follow the recommendations of the panel, and have the state board of education rubber stamp those recommendations.  In addition the panel recommended merely changing the name of the Common Core standards to the New Jersey Student Learning Standards.


Besides recommending improvements and revisions to hundreds of standards, the state Department of Education has proposed renaming the New Jersey Core Curriculum Content Standards, as well as the Common Core State Standards in mathematics and English language arts, to be named the "New Jersey Student Learning Standards."

It is right there as plain as day that New Jersey is still using Common Core! Also, like Florida, Indiana, and other states, New Jersey has little respect for the intelligence of the parents, students, and teachers of the state and is trying to pull off a deceptive rebrand while the Common Core is still in place. This is far from the "elimination" that Christie proclaimed in the GOP debate.

In addition, as both we and Emmett McGroarty have documented, the Every Student Succeeds Act (replacement for No Child Left Behind), will make getting out of the standards difficult indeed

Finally, Educator Peter Greene has likely correctly theorized another very important reason why no state will be courageous enough to change more than 15% of the standards:


Ditto for CCSS. If we all just taught to our own local standards, the data noise would be too great. The Data Overlords need us all to be standardized, to be using the same set of tags. That is also why no deviation can be allowed. Okay, we'll let you have 15 percent over and above the standards. The system can probably tolerate that much noise. But under no circumstances can you change the standards -- because that would be changing the national student data tagging system, and THAT we can't tolerate.

This is why the "aligning" process inevitably involves all that marking of standards onto everything we do. It's not instructional. It's not even about accountability.
It's about having us sit and tag every instructional thing we do so that student results can be entered and tracked in the Big Data Bank.

If you are in a state that "dropped" the Core, here's one simple test -- look at your "new" standards and ask just how hard it would be to convert your standards/tags to the CCSS standards/tags. If it's as simple as switching some numbers and letters, guess what -- you haven't really changed a thing, and your data is still ready to be tagged and bagged.


Christie was strongly in favor of Common Core in 2013 and his switch to opposing Common Core seems too tightly aligned to his presidential aspirations.


This supposed switch is hollow and his fact challenged claims have already been called out both by on the ball parent activists such as at Missouri Education Watchdog, as well as by CBS News. The New Jersey governor may be quite good on national security and some other issues, but he has failed both the truth test and smell test on Common Core and education. 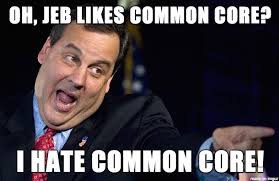 Senator Rubio is to be commended for bringing this important issue up during the debate.  Hopefully it is sincere opposition and not politically motivated given his strongly pro-Common Core donors, billionaires Paul Singer and Bill Gates.  It is great to see Senator Rubio echo the long held views of Texas Senator Ted Cruz, such as eliminating the US Department of Education and stopping the implementation of Common Core.

January 6, 2016
After only hearing the news the day they were due due to the holidays and travel, Dr. Karen Effrem submitted comments on January 4th in response to the US Departments of Health and Human Services and Education joint and very Orwellian "family engagement" policy framework. Here is a summary of the issues discussed: