September 16, 2015
The following is reproduced with permission by teacher and psychometric expert Darcey Addo, a school board candidate in Brevard County as more information continues to emerge about how problematic the FSA and the validity study are (see also the FSCCC study analysis amd discussion of the AIR contract)

Here are five fairly basic things I think every Florida parent should know about the testing debacle:

1.) The Florida Commissioner of Education testified to the Florida Senate on March 4, 2015, that the FSA was "the content of the test is absolutely psychometrically valid and reliable." She said that she would "be happy to provide" the evidence to support that claim. (More on that here if you're interested.) Repeated requests for the evidence were made, with no success. You can come to your own conclusion about the truthfulness of her statements.

2.) The Florida legislature demanded (in CS/HB7069) a "validity study" of the FSA. This $600,000 legislative requirement is in spite of the fact that studies of validity and reliability are not performed after a test with high stakes (graduation, retention, remedial placement, etc.) has been administered. Rather, best practice dictates that assessments are first alpha and beta tested, and then administered to students. Psychometric studies are certainly never with done with a legislative deadline - in this case, less than three months.

3.) The study found the test "valid", which is difficult to take seriously, because validity is not a property of a test. Don't. Get. Me. Started. We know, however, that the content does not align with the assessment. The study showed, for example, that on any given test, only 65%-94% of the standards matched the assessment. The highest stakes year, third grade, has a 65% match of standards to the assessment according to page 36 of the Alpine report.

In layman's terms: the FSA includes material that our students never learned in the classroom.

4.) Best practice and Test Standards require a review of test items by Florida stakeholders. From page 46: "While a review of the items by stakeholders in Florida would be expected based on typical practice...given the rapid development timeline and policy requirements, there was insufficient time to complete the review for the 2015 administration of the FSA assessment..."

In other words, the FLDOE rushed this process. The Florida legislature developed poor policy. Your kids didn't learn the material. Sorry, folks.

5.) There is not a single mention of the Algebra 2 or Geometry content in the entire report. Not one, although they were clearly defined as expectations in the Scope of Work (see pages 2&3, below) 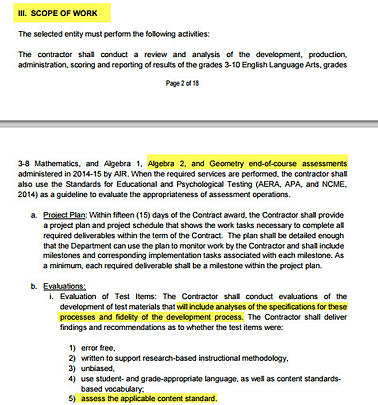 Did Alpine run out of time? Or were those tests even worse than the rest? We have no way of knowing.  Although our legislators say that these tests "inform instruction", they have legal backup to shroud them in secrecy, meaning that we will never get to see the tests unless this statute is challenged.

6.) Most importantly: Your child does not have to take the Florida Standards Assessment.

Alice in Wonderland Validity Study: FSA is Valid Except When It Is Not

September 11, 2015
As expected and in typical bureaucratic doublespeak, the Florida Department of Education used the report by the sole bidders for the allegedly independent review of the 2015 FSA test to magically deem that Florida's test scores could be used in the aggregate for school grades and teacher evaluations.  Commissioner Pam Stewart who has presided over much chaos and bears much responsibility for the many problems and lack of accuracy of her own statements in the Common Core standard and testing fiasco, called this statement by Alpine "welcome news." However, even the authors of the study, who have multiple incestuous relationships to the development of Common Core standards and the testing industry, admit numerous problems with their work blaming it all on a fast timeline or other factors beyond their control. Here are some of the most important issues:

"My name is Doug McRae, a retired testing specialist from Monterey.

Statewide test results should not be released in the absence of documented validity reliability and fairness of scores. Individual student reports should not be shared with parents or students before the technical quality of the scores is documented.  But, the real longer lasting damage will be done if substandard information is placed in student cumulative academic records to follow students for their remaining years in school, to do damage for placement and instructional decisions and opportunities to learn, for years to come. To allow this to happen would be immoral, unethical, unprofessional, and to say the least, totally irresponsible. I would urge the State Board to take action today to prevent or (at the very least) to discourage local districts from placing 2015 Smarter Balanced scores in student permanent records until validity reliability and fairness characteristics are documented and made available to the public." [Emphasis added]

It is appalling that Florida students, teachers and districts are going to be held to the results of these tests when there is such a high degree of mismatch.  The report's recommendation to eliminate the Utah questions is on the one hand vital for validity  and fairness of results that have such important implications for Florida students, and on the other hand problematic  given the plan to rent Utah questions for two more years at the cost of another $10.8 million. In addition, significantly changing the test questions over several years will make the test unstable as far as year to year consistency and usefulness to measure academic growth, supposed hallmarks of these statewide tests that cost hundreds of millions of dollars.

Alpine on the one hand tries to say that these studies were done well:
"Conclusion #5 Evaluation of Scaling, Equating, and Scoring
Following a review of the scaling, equating, and scoring procedures and methods for the FSA, and based on the evidence available at the time of this evaluation, the policies, procedures, and methods are generally consistent with expected practices as described in the Test Standards and other key sources that define best practices in the testing industry. Specifically, the measurement model used or planned to be used, as well as the rationale for the models was considered to be appropriate, as are the equating and scaling activities associated with the
FSA."

However, the exceptions that seem to admit that at least some of these studies were not completed seem to render the initial conclusion almost meaningless:
"There are some notable exceptions to the breadth of our conclusion for this study. Specifically, evidence was not available at the time of this study to be able to evaluate evidence of criterion, construct, and consequential validity. These are areas where more comprehensive studies have yet to be completed. Classification accuracy and consistency were not available as part of this review because achievement standards have not yet been set for the FSA."


"With SO many error messages and issues, frustration and stress levels were through the roof!"

"The report notes that in some schools, vague instructions meant entire grade levels had their math scores thrown out because students were allowed to use calculators when they shouldn't have, or used calculators that weren't allowed."

"One district reported that new drag-and-drop features didn't work and another said students weren't able to review their work."

"Districts wrote there was 'great confusion' because information was often given at the 'last minute.' One district wrote they were 'essentially flying blind' since they didn't even know what computer screens would look like on testing day."

"Survey results show the most frequent bug that schools had to contend with were unexpected computer crashes. Over and over again, students lost work in cyberspace when they were booted off the test. Sometimes their answers were recovered, sometimes they weren't. Though Etters said preliminary data shows all tests responses were captured, the problem knocked confidence in the exams."


Mere weeks before the tests, school districts were told that text-to-speech accommodations for children with special needs wouldn't be available and districts scrambled to find adults who could read prompts aloud during testing.


Within that report, Wiley said, the reviewers did find enough data to support using the test results at an aggregate level, such as school grades. However, he cautioned, many unknowns about the impacts to individual schools and students exist. That means more study would be appropriate, as the report suggests.

"We need to talk about how the aggregate scores can be used," he said. "It should be done with a lot of caution."

Wiley also shied from the idea of calling the test "valid."

"Validity is not a simple yes-no," he said. (Emphasis added).
Given these many problems and others not listed due to time and space constraints, FSCCC heartily agrees with the following sample of the numerous critical comments about both the study and the testing regime in Florida:

"'It's almost asking people to suspend their personal experience for a moment and just trust us that it went well, when people know for a fact that it didn't,' Andrea Messina, executive director of the Florida School Boards Association, told the Miami Herald."

Florida Association of District School Superintendents - "While the report is extensive and thorough, many of the results further confirm Florida superintendents' valid concerns regarding the validity of the FSA for use in teacher evaluations and school grade calculations. Superintendents firmly believe that the 2015 FSA results should be used as baseline data only."

Tampa Bay Times Columnist John Romano "This is what has come of the state's zealous adherence to Jeb Bush's educational reforms. Lawmakers have taken potential solutions and rammed them so far down the throats of parents and educators that additional discussion is nearly impossible.
The result is conflict. And confusion. And a generation of students being used as political pawns.
The problem is, our Legislature has destroyed the value of these concepts with nonsensical overkill. They've given standardized tests -- and thus the specific curriculum they are based on -- so much weight in classrooms, budgets and careers that these reforms have swallowed education."

Florida Education Association - "The report noted that the testing season in 2015 was a mess, that the test results shouldn't be used as prominently as they are by the state and the questions from another state don't reflect Florida's standards," Florida Education Association spokesman Mark Pudlow said in a statement. "That's far from a ringing endorsement of the DOE's approach."

For all of these reasons FSCCC calls for the cancellation of the AIR contract and return of local control with districts choosing their own standards, tests, and curriculum as it was prior to 1994, given that federal and statewide interventions have done nothing to improve academic achievement or close gaps and much to harm students and teachers.
Florida Stop Common Core Coalition, Inc. Florida Stop Common Core Coalition, Inc.