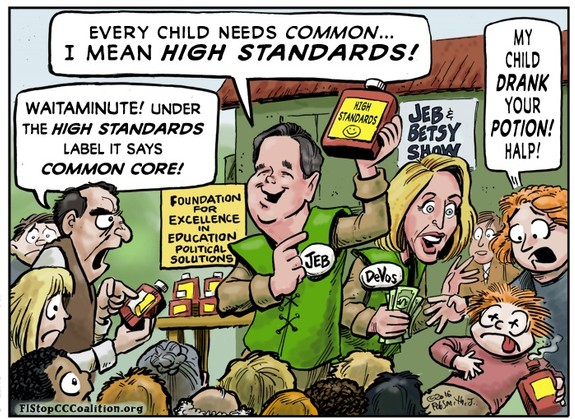 
President-elect Donald Trump has selected Michigan billionaire; Republican mega-donor, and school choice advocate Betsy DeVos as his Secretary of Education. The corporate, big government Republican establishment, such as Jeb Bush, his Foundation for Excellence in Education (FEE), Michigan Governor Rick Snyder, as well as groups that have received her large contributions, are thrilled with her appointment. Key education freedom leaders like Frank Cannon, president of the American Principles Project who called her a "very Jeb-like pick"; Joy Pullman, managing editor of The Federalist; and grassroots parent anti-Common Core groups in Michigan, Oklahoma, we here in Florida, and around the nation are justifiably concerned.

Understanding her future boss' promise to get rid of Common Core, as well as how fatal it was  to the presidential campaigns of her friend and fellow FEE board member, Jeb Bush, whom she supported, and others that Donald Trump beat, she put out a hastily constructed statement on Twitter and her website the day she was appointed, alleging her opposition to Common Core, stating that she is "not a supporter-period," because it had turned into a "federalized boondoggle":

Here are several important things to know about DeVos based on her rhetoric quoted above; her record as documented by the Stop Common Core in Michigan parents who have experienced her brand of education reform firsthand, and other sources.

1)      DeVos used Jeb Bush's "high standards" euphemism for Common Core    Her mention of "high standards" in her website statement and the report of having discussed "higher national standards" in the Trump Transition Team readout of her November 19th meeting with the president-elect, are identical to Jeb Bush's efforts to deflect criticism of his Common Core support before and during his failed presidential campaign right down to the "Period.":


Education Next: You have been a steadfast supporter of the common core, even when others have become increasingly critical. Why? What do you say to critics?

This has all the believability of a multi-level marketing campaign selling educational snake oil. Bush readily admitted while campaigning for Rick Scott in 2014 that there was no major difference between Common Core and the rebranded Florida Standards: 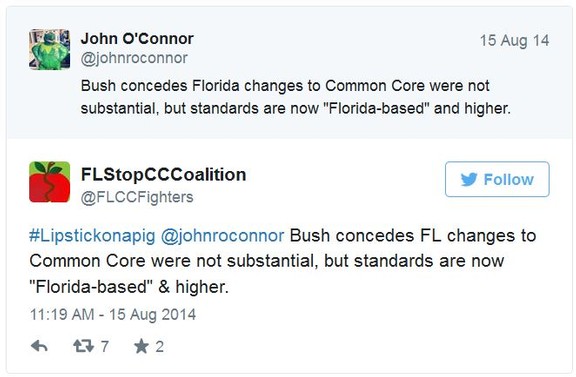 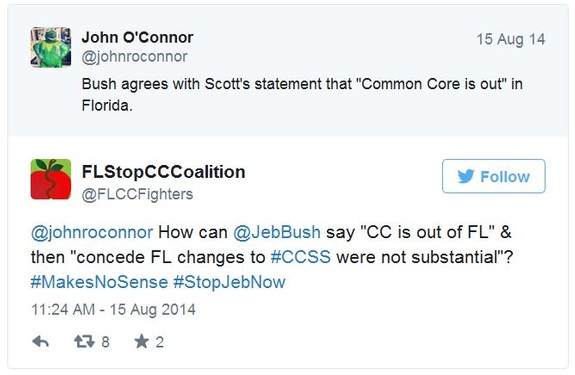 Bush and DeVos have never been able to explain just exactly how Common Core standard may be considered "high" when they were untried; are not rigorous; not internationally benchmarked; developmentally inappropriate, etc.

And her concept of "high standards" with local control is a complete oxymoron. Whether these "higher national standards" are called Common Core or not, the federal government has no place whatsoever promoting national standards at the federal level or in the states. Yet, sadly, by use of the secretarial veto of state plans and federal requirements to have standards and tests comply with 11 different draconian federal laws, this is what has happened with Jeb Bush's admitted involvement in ESSA. If and until the USED is closed or scaled back and or ESSA is repealed, if she believes in local control, she must approve the state plans.

2)      Betsy DeVos has no record of Common Core opposition. The website statement and tweet the day she was appointed were the first indications of being against Common Core ever documented. In fact, she has been described as supporting Common Core by Tonya Allen of the Skillman Foundation in the Detroit News. There is absolutely no record of her or any of the three major organizations that she has founded, chaired or still chairs, and funds The Great Lakes Education Project (GLEP), The American Federation for Children (AFC), and the Philanthropy Roundtable (PR) ever having opposed Common Core. She never reached out to, and in fact, steadfastly refused to meet with or assist Stop Common Core in Michigan in any way. The GLEP executive director even threatened these parents with legal action.

3) The organizations that she ran, not just "worked with,"  were intensely pro-Common Core:
Does anyone honestly believe that she would allow these groups she basically controls to take such pro-Common Core actions if she opposed the standards?

4) Betsy DeVos personally lauded, and AFC strongly supported, and funded the 2011 Indiana law signed by Mitch Daniels that imposes Common Core on private voucher schools via the tests. The law requires voucher recipient schools to administer the public school Common Core-aligned tests without the option of choosing a nationally norm-referenced test (sec. 4.7) and submit to the grading system based on those same tests.  The tests determine what is taught. Indiana still has Common Core via the infamous rebrand perpetrated by VP-elect Mike Pence and "is the second-worst in the country on infringing on private school autonomy" according to the Center for Education Reform because of that and other onerous requirements. Indiana's law received an F grade on the Education Liberty Watch School Choice Freedom Grading Scale.

5) DeVos and AFC are strong supporters of federal Title I portability.  This program would require the same public school, Common Core tests and likely, the rest of draconian and unconstitutional federal regulations for private schools as are currently imposed on public schools. This would eliminate them as a real "choice"  and would expand the "federalized boondoggle" she says she opposes. Jeb Bush recommended this same kind of program requiring the state tests for Mitt Romney in 2012 (p.24).

6)      DeVos seems to favor highly regulated Common Core-aligned charter schools Although charter schools are public schools usually requiring the public school Common Core tests, there are some that are trying to blaze a trail of independence. Hillsdale College in DeVos' home state of Michigan is nationally renowned for its classical and constitutional teaching and for not taking federal funding.  It has also developed non-Common Core classical charter schools.  Hillsdale President Dr. Larry Arnn says, "...we only put those charter schools in states where the charter law enables the independence of the school under a local board to run the school as they please."

Although there are token mentions of the Hillsdale programs on various of her organization websites, that style of charter school is not favored by her. The Philanthropy Roundtable group that DeVos chaired until her appointment published a report on charter schools, but did not once mention the Hillsdale program. There is no evidence that her that her family foundation has made a single donation to Hillsdale College, including to its charter program. She should be asked why she seems to want all charter schools in Michigan and elsewhere to only teach Common Core aligned standards, curriculum and use those tests. How is that advancing any real parental choice in education?

7)      The DeVos organizations seem very cavalier about student privacy - The Philanthropy Roundtable, which she chaired until her appointment, published a report called Blended Learning: A Wise Giver's Guide to Supporting Tech-assisted Teaching (analyzed HERE) that lauds the Dream Box software that "records 50,000 data points per student per hour" and does not contain a single use of the words "privacy," "consent," "transparency" [as in who receives that data and how software algorithms crunch that data to make life changing decision for children]. The report also prominently mentions Knewton, whose CEO bragged about collecting "5-10 million data points per user per day." Blended learning is the same as Competency Based Education with its teaching, invasive data mining, and psychological profiling by machine that we have warned about .

It is in stark contrast to another Trump promise on the campaign trail to protect student privacy. When asked if he would close the FERPA loophole opened by the Obama administration allowing sensitive data to be shared widely without consent, he said:

8)      The DeVos chaired (until her appointment) PR group also supports expanding invasive, subjective social emotional learning The PR's national conference had a breakout session titled: Enabling Student Success: How Social-Emotional Learning Can Impact Schools. The recap had no discussion of privacy,freedom of conscience, or indoctrination concerns. It called parents merely "assets" in student learning. The T74, a pro-Common Core education blog funded by the DeVos Family Foundation carried a post attacking the Federalist article written by Jane Robbins and myself as the "journalistic equivalent of yelling 'fire' in a theater" without substantively answering our concerns. The author works at Bellwether Education Partners, whose partners include (surprise, surprise) DeVos' PR, Bush's FEE, and the Gates Foundation, all major supporters of Common Core and of SEL.

None of this constitutes "draining the swamp" in education.  American Principles Project senior fellow Jane Robbins said it very well in her excellent piece, Jeb's Revenge:

Bush professed himself thrilled with DeVos's "outstanding" nomination to be Education Secretary, and with good reason - he surely believes she'll use the stratagems the cartel has employed for so long to impose its own vision of what American education should be. DeVos must instead assure the grassroots that she'll use her new position to eliminate federal interference and truly return education policy to the states. Trump was elected to achieve that goal, not to install Jeb's agenda. He should make sure DeVos understands that.
Florida Stop Common Core Coalition, Inc. Florida Stop Common Core Coalition, Inc.