With Mounting Common Core Criticism, Bush May Be More Harm than Help to Scott 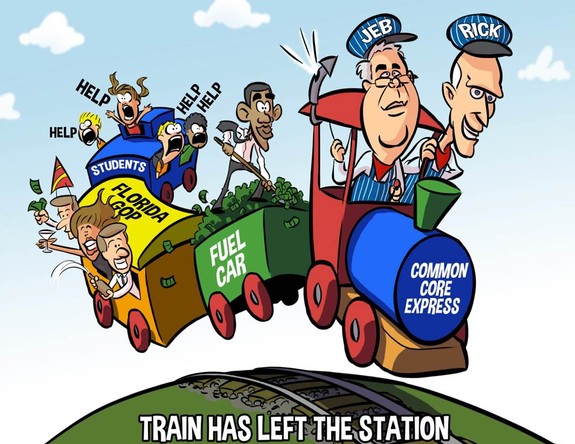 Sunshine State News just reported that former Governor Jeb Bush and Senator Marco Rubio will be holding a fundraiser for Governor Rick Scott on October 24th as he campaigns for re-election. Reporter Jeff Henderson stated that even though conservatives disagree with Bush on Common Core, that "Scott could have no better people to beat the drums to get Republicans out than Bush and Rubio."

Given recent events, we would question that assertion where Bush is concerned.  When Bush recently campaigned for Scott, he all but admitted that the Scott administration's elaborate ruse of pretending to care what the people of Florida thought about the standards and changing only 0.9% of them under the deceptive moniker of the Florida Standards was a sham.  Bush called the changes "not substantial."  That bit of campaign support from Bush has not helped Scott break out of the polling deadlock he is in with Charlie Crist.  In fact, both Crist and Scott received low marks for honesty in a recent Quinnipiac poll. The latest Survey USA poll has Scott down 6% to Crist with Adrian Wyllie at 8%.  That gives the latest Real Clear Politics average to Crist at 1.4% ahead of Scott for the first time in several weeks. Scott won by less than 2% in 2010 with full conservative support.

When Bush went to conservative North Carolina to campaign, even moderate Thom Tillis had to publicly distance himself from Jeb on Common Core.   Bush then was raked over the coals by Slate columnist Jamelle Bouie in the Miami Herald over that tone deaf performance:

The Tillis affair is representative of Bush's flaws as a candidate. A more-talented politician would have tailored his message to his audience. Indeed, it doesn't take a savant to know that -- if you're supportive -- immigration and Common Core are areas to avoid with a conservative audience. But then, Bush isn't in the same world as rivals like Sen. Ted Cruz, Sen. Rand Paul or even Gov. Chris Christie.

Since leaving office, Bush has lived in the realm of corporate philanthropy, where wealthy executives give huge sums for a variety of unconservative causes, like climate change and Common Core. It's a world of vocal centrism, where Michael Bloomberg is esteemed and the fights are for gun control and calorie labeling, not traditional values and the repeal of Obamacare.

It's possible that Bush could abandon this and shape himself into a warrior for Republican conservatism. But I doubt it. As a major advocate for Common Core (his Foundation for Excellence has collected millions from pro-Common Core groups) and immigration reform, he's too removed from the world of conservative politics to adapt...

...Yes, Republican elites want a champion. But in Jeb Bush, they don't have a fighter, they have a Fred Thompson. For a genuine contender, they'll have to look elsewhere.

Will Jeb Bush be helpful to Scott when Bush has been so cozy with Barak Obama and Arne Duncan, the perpetrators of Race to the Top and the illegal No Child Left Behind waivers, that both strongly incentivize Common Core? We don't think so. 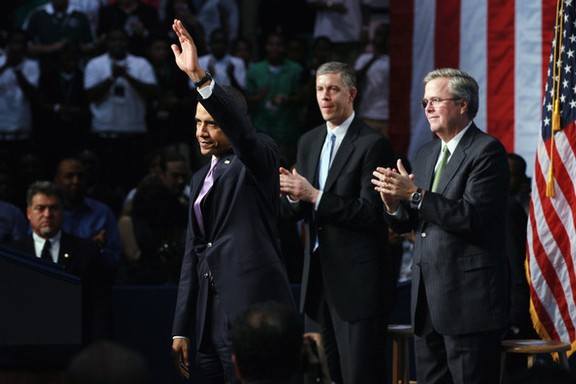 And Jeb continues to take heat from a growing number of national conservatives.  Witness this post by Red State's Eric Erickson who showed yet another absurd Common Core math example:

He then said:
"This is why Jeb Bush will not be President. It is also going to end very, very badly for many other politicians. The only champions of common core I know are paid to like it and most of them have no kids"


You have to choose (for the purposes of this comment section) among Jeb Bush, Chris Christie, and Mitt Romney to be the next Republican presidential nominee. Rank your choices and explain your rankings. No substituting hemlock or the like.

The comments showed that even among those three very moderate candidates, Bush was often listed third.  Here is just one example:
3 - Bush. Conservatives don't like his stands on immigration and Common Core. People who oppose Hillary Clinton because of their aversion to establishing another Kennedyesque family dynasty also oppose him.
2 - Romney. Too wishy-washy - willing to change his positions depending on how the political winds blow. Conservatives think he's too liberal; liberals think he's too conservatives, so nobody's happy with him. Another run & he turns into a 21st-century Harold Stassen.
1 - Christie. His pugnaciousness is a positive. Unless consultants tone him down, he won't acquiesce to the liberal media, the conservative pundits, or foreign leaders. He doesn't have Romney's wishy-washiness or Bush's last name. Plus, a Northeastern (somewhat liberal) Republican might have crossover appeal to conservative Democrats.

Marco Rubio, who has issues with the conservative wing of the party on the immigration issue as does Bush, still opposes Common Core.  Rubio is likely to be more helpful to the governor than Jeb Bush who is participating in the same deceptive tactics as Scott, saying that Common Core is out of Florida.  And Bush is pushing the expansion of federal control of education in Florida and across the country, while Rubio is fighting the standards.  It will be interesting to see what happens.
Florida Stop Common Core Coalition, Inc. Florida Stop Common Core Coalition, Inc.

I am against common core and I want it stopped now! If you do too, you need to vote for Adrian Wyllie. He is the only one that is against common core. You can lie to yourself and think Scott is if you want, but this is not a game, it is serious and we don't have time to cross our fingers and hope. You want common core gone? Then vote for Adrian Wyllie. No excuses.Comparison chart of the Candidates for Florida Governor:https://karldickey.files.wordpress.com/2014/09/wyllie-comparison-chart1.jpg