Walker Catching Bush Even in Florida! Common Core an Issue! 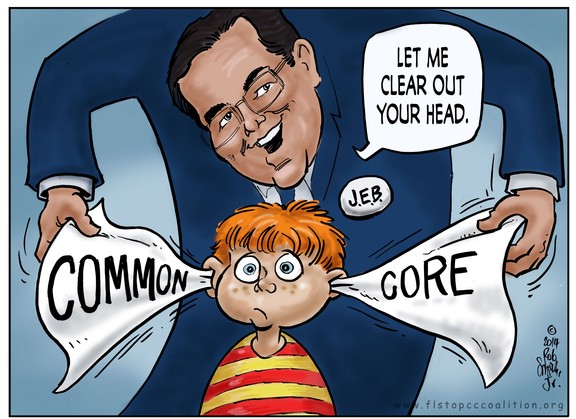 Despite lots of money and trying to project the aura of inevitability, Jeb Bush is having a lot of problems in polls and surveys even here in his home state of Florida.  A poll by Gravis Marketing that came out this past week showed that he is in a dead heat with Wisconsin Governor Scott Walker: 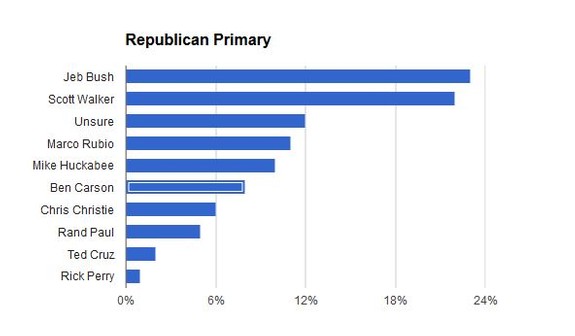 "Pitted against each other, Bush is at 40 percent and Rubio is at 36 percent," said Doug Kaplan, the managing partner of Gravis Insights, the Florida-based firm that conducted the poll. The poll carries a margin of error of 5 percent.  The total may not round to 100% because of rounding.

But, when the field is opened up to other candidates, the dynamic changes, he said. "We are seeing the early stages of two-man horse race between Bush and Walker."
In the open field, Bush still leads with 23 percent to Walker's 22 percent, he said.
"But, Bush v. Walker is, again, inside the margin of error," he said.

"Rubio is popular, but in his home state, he is taking a back seat to Bush v. Walker," he said. "Even among Hispanics, Bush takes 24 percent, Walker 23 and Rubio, a Cuban-American, comes in third with 11 percent--roughly, his same level of support across the state's Republicans in an open field."

By law, Rubio cannot run for both president and for reelection to the Senate, but, he does not have to make that decision until May 2016and by then, the primary season will be winding down anyway.

The other GOP hopefuls offered in the survey fared like this:
This poll comes right after the Conservative Political Action Conference (CPAC) where many attendees walked out on Jeb Bush and he had to bus in many people to attend his speech and vote for him to save face during the famous straw poll by finishing 5th after Senator Rand Paul, Governor Scott Walker, Senator Ted Cruz, and Dr. Ben Carson.


Other polls continue to show that the more they know about Common Core, the less they like it. A Farleigh-Dickenson poll showed that only 17 percent of Americans support the Common Core standards while 40 percent disapprove and 42 percent were unsure.  Support drops to 9 percent for Republicans.  None of this bodes well for a Bush presidential run.

The former Florida governor may have a lot of money and establishment/corporate support, but absolutely does not understand the depth of opposition to him because of his support for Common Core and the harm it will do to people' s children as summarized by this Facebook meme: