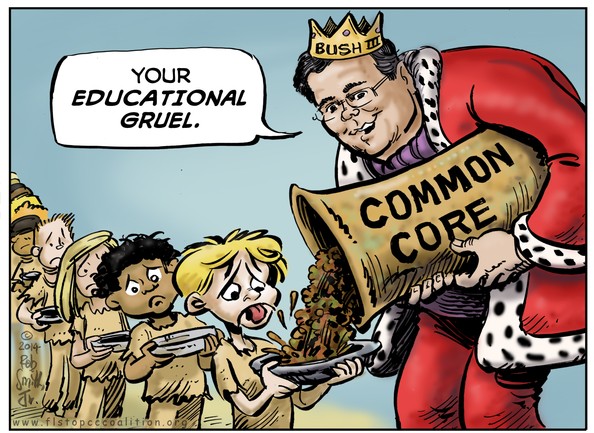 Jeb Bush gave the keynote speech at his Foundation for Excellence in Education national education summit in Washington DC on November 19th.  He made an effort to soften his attacks on those who oppose Common Core by now saying he respects us and by shifting blame to the federal government.  As his remarks in Education Next on Common Core required a rebuttal, so too do his efforts to continue his unreasonable defense of Common Core.  Here is a response to some of his statements on Common Core from that speech:
JB:  This is why the debate over the Common Core State Standards has been troubling.

KRE:  What is really troubling is that you think these horrific standards that are academically inferior, developmentally inappropriate, and psychologically manipulative with their accompanying tests and invasive data collection system should just be imposed on the nation without a word of protest from the parents, students, and teachers that have to suffer under them.

JB: I respect those who have weighed in on all sides of this issue.  Nobody in this debate has a bad motive.

KRE:  I suppose that we should be happy that you have changed your tune from this same speech a year ago when you called opposition to Common Core "political" and full of "conspiracy theories." However, everyone can see that it is you who are being political as you try to placate opposition while getting ready to run for president.

JB: And in my view, the rigor of the Common Core State Standards must be the new minimum in classrooms.

KRE: There is nothing particularly rigorous about these standards. They are untested and not internationally benchmarked. Federally mandated state standards have done nothing in this country to improve achievement and several think tanks including the Brookings Institute say that national standards, particularly Common Core, will not improve achievement either.  Imposing these very problematic standards will only further denigrate our very troubled education system.

JB:  For those states choosing a path other than Common Core, I say this: Aim even higher...be bolder...raise standards and ask more of our students and the system.

KRE: It is not states that should be doing this via federal mandates, but rather parents, teachers, and duly elected school boards at the local level working to improve education without federal and state micromanaging.

JB:  Even if we don't all agree on Common Core, there are more important principles for us to agree on.

KRE:  The most important principles on which to agree are supporting the Constitution, parental and local control of education, and state sovereignty, all of which you, your father, and your brother have undermined for the last twenty-five years by the programs you have imposed or are pushing.

JB: First, parents would have the right to a full and competitive marketplace of school options. Neighborhood schools. Charter schools. Private schools. Blended and Virtual schools. Home schools. Children would be able to cross zip code lines, municipal lines and county lines into neighboring school districts. Families would be given a say over their children's teachers, and would be given the information needed to make those decisions.

KRE: This sounds wonderful - the universal voucher.  However, in the Bush world of accountability, all this would do is impose the public school Common Core standards, tests, and data collection system further on private and home schools.  This would destroy the last of the alternatives and escape hatches from Common Core and government/corporate control of education.

JB:  So if the federal government wants to play a role in reform, it should stop tying every education dollar to a rule written in Washington D.C...They should make more programs IDEA, Title One, early childhood programs into block grants that the states can deploy as they see fit, including vouchers to enhance state programs...Education should be a national priority, not turned into a federal program.

KRE: When you were advising the Romney campaign on education in 2012, you suggested that federal vouchers would require the federally mandated state tests for "accountability." This would be the federal imposition of the Common Core tests and therefore the standards on private and home schools. Federally funded and controlled universal vouchers are even more dangerously unconstitutional than those on the state level.  It is very interesting to see your new found opposition to federal control of education now as you get ready to run for president. Why are you only now starting to criticize federal interference in education when your father and brother were more responsible for increasing that interference than any other presidents in U.S. history before Barak Obama and while you happily imposed those mandates on Florida when you were governor without a word of protest?