Rebuttal to US House Ed. Committee Talking Points on ESSA

The House Education and Workforce Committee put out an infographic trying to convince their members that the 1061 page monstrosity released only about 48 hours before the final vote to rewrite No Child Left Behind is a Republican "win."  They are trying to make their members feel okay about throwing our children to the Common Core beast and ignoring more than 200 parent groups in 46 states and instead listening to the Washington Cartel education elites and corporate raiders.  Here are their claims followed by the truth.

2)      CLAIM:  Prohibits the sec. of education from forcing, coercing, or incentivizing states into adopting Common Core
TRUTH: ESSA heavily influences standards within the bill itself. This requirement to have the standards comply with 11 different unconstitutional federal statutes setting up standards similar to Common Core will be statutory a state must comply with it regardless of what the Secretary does or doesn't do. (Details HERE)

3)      CLAIM:  Ends the era of federally mandated high-stakes tests
TRUTH: Tests are still federally mandated along with 95% participation with no opt-out clause as was present in the House bill.  There are new mandates for the tests to be psychologically profiling "higher order thinking skills" and "strategies to improve students' skills outside the academic subject areas." This is combined with new evidence of lax student data protection.

4)      CLAIM: Eliminates the federally mandated one-size-fits-all accountability system
TRUTH: While it is an improvement that AYP is gone, the mandates for what states must include in their accountability systems are still very concerning, especially in non-academic areas.

5)      CLAIM: Repeals 49 ineffective and duplicative federal programs
TRUTH: The appropriations language will have to be examined to make sure these programs are actually eliminated, not merely consolidated as was mentioned by several groups during discussion of HR 5. The ineffective, invasive 21st Century Community Schools with increased mental health interference are funded.

6)      CLAIM:  Provides states and schools with new funding flexibility
TRUTH: With all of the myriad legalistic and detailed requirements in a 1061 page bill, flexibility is in the eye of the federal bureaucrats that will be beholding this mess for interpretation and implementation.

7)      CLAIM: Holds the line on no new pre-K programs
TRUTH: How this can be said with a straight face when there is $250 million in new grant spending with required alignment to Head Start that requires controversial psychosocial "Baby Common Core" national standards and there is so much research showing lack of effectiveness or harm of these programs is beyond comprehension.  (See HERE for more details).

9)      CLAIM: Offers parents more school choice.
TRUTH: While it is good that private and home schools seem to have escaped coming under the federal strings and regulations, such as requirement for public school standards like Common Core  and tests in this bill, proclaiming charter schools as a great alternative to public schools is not exactly accurate.  These are still public schools, have unelected boards, must give the public school tests based on the Common Core standards in the vast majority of states, and are a boon to unaccountable corporations.

10)   CLAIM: Provides a four year authorization of the law
TRUTH: This is an improvement over the previous seven year period that went for fourteen, but any amount of time that carries the requirements for federally mandated standards and testing that psychologically profiles our children and results in essentially the same type of standards as Common Core along with many other invasive programs is still too long. 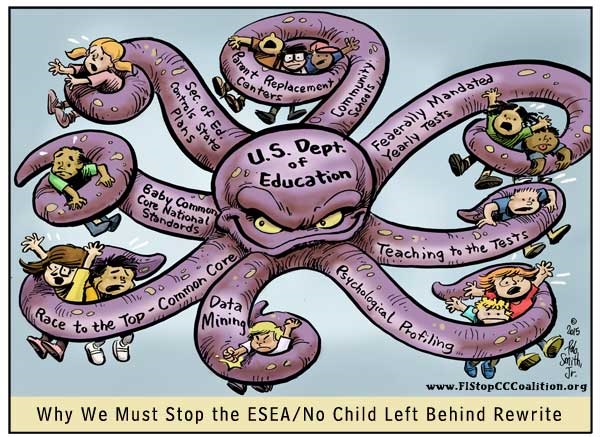 Our representatives must listen to the voice of the people. No ESEA! Our children deserve better.

I urge you to stop ESEA/No Child Left Behind Rewrtie

Thank you for doing this. It is infuriating that the Republicans are so hell-bent on ignoring their constituents.