July 30, 2015 Karen Effrem
The American Institutes for Research (AIR) is already extremely problematic both as the creator of the Smarter Balance (SBAC) computer adaptive testing platform and as statewide test provider for numerous other states  that include Florida, Arizona, Montana, West Virginia, and now Ohio.  We have chronicled these problems that include:
Psychosocial testing and data collection
Manipulative computer adaptive testing
Controversial social emotional intelligence and experimental education programs
Admits that Common Core is a national curriculum
Its founder was involved in racial eugenics experiments
Collects data on individual students and teachers through their national longitudinal database

As evidence of their student psychological and attitudinal profiling and data mining mounts, AIR continues to prove that they should not be the ones responsible for testing millions of American students via federally mandated, funded, and or supervised tests for either the SBAC federal consortium or for individual states.  Here are the latest revelations:

1) AIR is involved with the US Departments of Education and Justice to implement an Orwellian data gathering, monitoring, and psychological screening program in the Miami Dade Schools and across the country called The Campus Shield Initiative.  This program involves an alarming amount of data collection combined with subjective and ineffective mental health screening of every child in a school, ostensibly to allow law enforcement and school officials to prevent violence.  The program plans are revealed on the website:

"One major recent development in preventative policing efforts is the use of social media by police to circumvent threats. The use of social media in school crime prevention is particularly relevant, considering the rise of Internet threats as precursors to school violence.  With little effort, police are able to access information posted on Facebook, Twitter, YouTube, or other social media sites.

In order to evaluate the effectiveness of the Campus Shield package, experimental testing will be conducted, which will also contribute knowledge to the field about the impact of such complex interventions. Campus Shield, however, effectively integrates data from RMS, CAD, and MFR, along with data from other law enforcement agencies (including local, county, federal, and state); visitor access and video surveillance records; the M-DCPS Blackboard Connect system; M-DCPS student records; Miami-Dade Crime Stoppers; and social media. This integration of data from multiple information sources presents a major departure from "business as usual" for police agencies and many school districts.

Here are just a few quotes from experts showing that how difficult it is to actually correctly diagnose children and adolescents with mental illness and or to predict which of those will be violent:
Quotes from Washington Post Interviews of Experts after the Newtown, CT Shooting
"At present, most psychiatric disorders lack validated diagnostic biomarkers, and although considerable advances are being made in the arena of neurobiology, psychiatric diagnoses are still mostly based on clinician assessment." (Jeste, D (President of the American Psychiatric Association) The New DSM Reaches the Finish Line Huffington Post 12/11/12 http://www.huffingtonpost.com/dilip-v-jeste-md/dsm-5_b_2280155.html)

"Childhood and adolescence being developmental phases, it is difficult to draw clear boundaries between phenomena that are part of normal development and others that are abnormal." (World
Health Organization (2001) World Health Report)
.
This is the high tech version of the long standing big brother joint effort between the US Departments of Education and Justice called Early Warning, Timely Response that has as one of its seven warning signs of potential violence and instability - "Intolerance for Differences and Prejudicial Attitudes:"
"All children have likes and dislikes. However, an intense prejudice toward others based on racial, ethnic, religious, language, gender, sexual orientation, ability, and physical appearance when coupled with other factors may lead to violent assaults against those who are perceived to be different."

Of course these highly subjective "other factors" are never explained.This is quite similar to the Office of Civil Rights within the Department of Education gathering data based on actual or perceived sexual orientation, gender identity or religion. How does one know what the perceived condition is? There was the exact same language in a bullying amendment for the Senate's Every Child Achieves Act and present in a joint White House and USDOE blog:

Bullying is an epidemic that has gone ignored for too long, and far too many of our young people are targeted and harassed based on their actual or perceived sexual orientation, gender identity, or gender expression.

It is also extremely important to know that the overuse of very ineffective psychotropic drugs with harmful or fatal side effects has proliferated in recent years due to similar mental screening programs like TeenScreen that had to shut down due to lawsuits over consent issues required by the federal Protection of Pupil Rights Amendment, lack of validity studies, and unseemly connections to the pharmaceutical industry.Setting aside for a moment the critical civil liberties issues, the screening in Campus Shield will also be unlikely to be helpful either, because there will be a tendency to use these medications that actually cause violent and suicidal reactions in and of themselves.Here is some of that evidence:
To varying degrees,  all psychiatric drugs are associated with both increased suicidal thoughts and ideation as well as akathesia, an extreme inner sense of agitation, which can and has been associated with at least 64 incidents of violence at schools, including mass shootings like Columbine, Red Lake, and as it appears, Newtown.  There are at least two reports that have not been discredited that Adam Lanza was on some type of medication.  Here is a chart showing the gun related incidents resulting in deaths in the US derived from www.ssristories.org The likelihood of this policy turning schools into a politically correct free speech zones with severe curtailment of free speech and religious liberty as well as potential for forced or at least incorrect and dangerous mental health treatment is alarmingly high. As the first set of quotes above from the Washington Post shows, even trained psychiatrists and psychologists cannot accurately determine who is going to be violent among people that have already diagnosed mental illness.The next several quotes in that group show how subjective mental health diagnosis really is, especially for young people.If trained experts cannot get it right, it is highly unlikely that screening based on social media posting is going to be accurate or helpful.There are also major issues of consent and civil liberties that are at risk in this situation.This program should be stopped in its tracks.

2) AIR will also be involved in tracking much data about school discipline events in order to monitor if there is discrimination in how discipline is meted out:
"Addressing the Root Causes of Disparities in School Discipline, An Educator's Guide, helps schools and districts address persistent disparities in school discipline. It includes tools to assess and systematically address disparities in a data informed manner that looks at causes that go beyond discipline and may begin earlier in a student's life."

This will involve collecting and evaluating a ten page list of data elements about discipline incidents based on "gender, race, ethnicity, disability, and sexual identity, and for other subgroups." Then schools "will learn how to identify and understand the factors that contribute to them by conducting a root cause analysis."

This is turning school discipline into identity politics.The far more likely reason that certain minority students have greater problems with discipline is not because of racial discrimination, but because they are sadly more likely to be from families that have only one parent.This has been borne out in myriad studies of students from single parents regardless of race having worse outcomes in areas related to academic achievement, discipline, crime, drug use, and teen pregnancy.Conversely there is strong research in a study of over 20,000 minority students by Dr. William Jeynes of the University of California at Santa Barbara showing complete elimination of the achievement gap if those students are from two parent families and those families have religious involvement:

Instead of punishing already stressed schools about disparate discipline, the federal government and states should promote two parent family formation by not punishing paternal involvement in welfare policy and reforming no-fault divorce laws.

3) AIR is psychologically profiling students by promoting the use of the extremely subjective Gallup Student Survey to study school climate in the Pasco County schools that even it admits has no validity studies to justify its use: 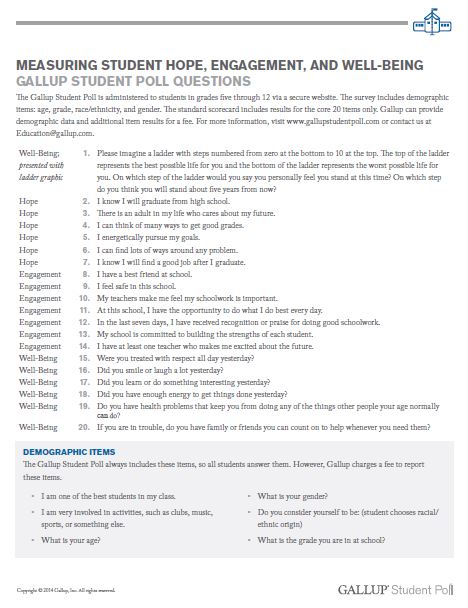 This chart from AIR clearly states that the Gallup Student Survey has "no available tests of validity." In fact, of the seven studies and surveys listed in this document to be used for teacher evaluations, only one has any real validity studies listed and that is for principals, one is supposedly validated by the Bill and Melinda Gates Foundation that is also doing studies with wireless skin conductance bracelets to measure heart rate of students as a means of measuring emotions, and all of the other five say, "no available tests of validity." 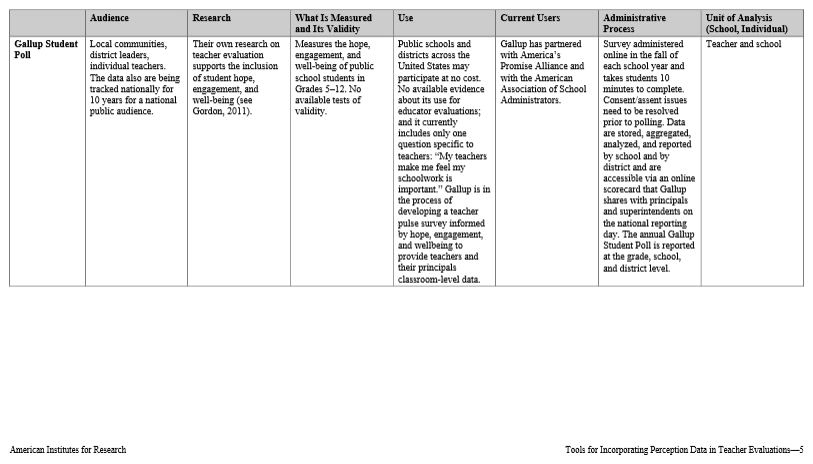 This is quite tragic, because AIR is already involved in putting forth student tests that are not valid and (see also confirmation from Utah officials), which are already being used for life changing high stakes purposes that include graduation, grade promotion, and teacher evaluations.They are compounding their crime by using invalid subjective surveys that are to be combined with these invalid tests that should have been validated as part of the $220 million Florida taxpayers have already spent for this ridiculous scheme.But instead despite assurances from the commissioner in testimony, there are no studies anywhere, and therefore citizens had to call for another validity study and have the state squander another $600,000 to only get one bid and hire a company that is not independent, but tied at the hip to AIR via sharing multiple employees.
.
This all shows that the FL DOE did not do its due diligence on AIR, that jumping from the PARCC frying pan to the AIR/SBAC fire was an enormous mistake, and that all of Florida should follow Seminole Superintendent Walt Griffin's wise advice and use already vetted nationally norm referenced tests on paper.
Florida Stop Common Core Coalition, Inc. Florida Stop Common Core Coalition, Inc.