October 11, 2014 Karen Effrem
Debbie Higgenbotham, homeschooling mother of seven children and anti-Common Core warrior via the group Florida Parents R.I.S.E. which she co-founded, recently met Governor Scott on a campaign stop and was able to tell him how dangerous his refusal to deal honestly with Common Core is for children and for his re-election:

I had the opportunity to meet the Governor on one of his campaign stops at a pizzeria in St. John's County. Since we home school our kids, it was a great opportunity for a field trip to experience what it means to be involved and educated on issues that concern our state. We were expecting to see a large crowd surrounding the building when we drove up but to our surprise there was hardly anyone there. Finding a parking space was fairly easy. With lots of smiling faces we made our way to two booths in the restaurant. My good friends, Dru Faulk and Leanne King, were already there and getting acquainted with the other people who were there.

After the speech was done we were one of the first to join the Governor for a quick picture. The Governor was awed at the fact that these were all my children and that there were 7 of them. And also how well behaved they were. He made some small talk with the kids. He bent down to have a better conversation with them which I thought was genuine. He even held the baby who was reaching for him at one point. As we stood there posing for pictures and chatting I started my plea. I started by saying that we were a home schooling family and he seemed impressed by that. He made the comment that he is trying to convince his daughter to home school his grand-kids.  I was stunned by that but encouraged him to keep talking with her about it. But I revealed why we were home schooling, and that was because of Common Core. I was working hard with everyone I could to get rid of Common Core and the federal mandates from our schools. Until then, none of my children will return to any classroom. 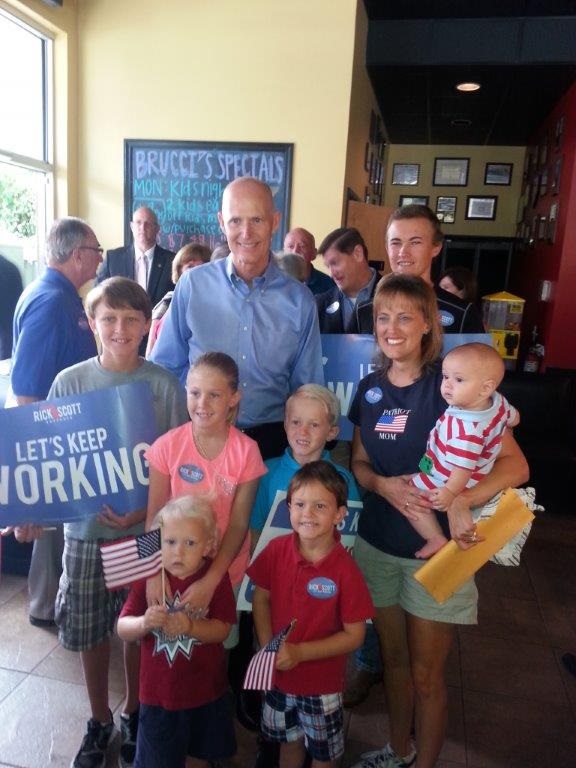 I handed him a packet of information which Dru had put together. He asked me if I had ever met or talked with Kim McDougal, his education adviser, and I assured him that she and I were well acquainted and that I have had conversations with Pam Stewart on multiple occasions. He then asked me if I had talked with Gary Chartrand and I informed him that Gary Chartrand refuses to answer any more of my e-mails. His jaw dropped with absolute shock at what I said. I think he was disappointed at my answer.

I remember saying to him that these were my children and they are my gifts that I treasure and I want the absolute best for them and what Florida has in place in educating our children was far from the best. In continuing with my plea, I explained to him that most parents across the state feel that our legitimate concerns were not reaching him personally with the urgency we felt necessary. Parents felt that that the messages were being watered down and the governor was not getting the real truth from Pam Stewart and Kim McDougal on the detriment of Common Core and the assessments that will be taking place this year.  I told him that AIR needed to be looked at and truly investigated as being our contracted testing agency and that Pam Stewart alone should not have the authority to hire agencies without proper vetting.

I firmly took his arm and told him that I didn't want him to have to look his grandchildren in the eye in 5-7 years and tell them he had the opportunity to fix this and he didn't and it resulted in their education being screwed up.  By then Kim McDougal was telling us we needed to wrap it up. I closed by telling him that I wanted a seat at the table of the committee he was forming but also to be looking at doing something now because there are a lot of people who will not vote for him if he continues to not take a stance on this issue of Common Core and all its tentacles wrapped around Florida. By looking at the expression on his face I could tell he wanted to talk more, but he could only respond with saying that he couldn't really do much until after the election.

In closing, I thanked him for his time and urged him to call me to have a casual conversation about what I had handed him in the packet. None of us were out to ruin him but we wanted to help him. The visit was longer than I had expected and I was able to say what I thought I needed to. He is a very nice man who truly wants to do the right thing but unfortunately his hands are truly tied with the strings Jeb Bush and the Republican Party have on him. Also I don't think he has all the information in order to make an informed policy change on Common Core.
Florida Stop Common Core Coalition, Inc. Florida Stop Common Core Coalition, Inc.

Debbie, Thank you for all the time and attention you have dedicated to the children of Florida. And thank you for reaching out to Gov Scott one last time. That Gov Scott is hiding behind Pam Stewart and Kim McDougal gives new meaning to the "war on women" and validates the concerns I have checking his box Nov 4th. His group has been stringing FL Parents Rise and dedicated parents throughout Florida along for month and we have nothing to show for it. Looks like Jeb Bush and company has underestimated "the hand that rocks the cradle". And they wonder why women in their child bearing years do not vote for Republican candidates. Let's keep up the fight until we elect a candidate who will work with us, not against us.

Governor Scott, My husband and I feel the same way as stated in the above article. We will vote for our local offices. You had our vote to elect you, but in our fight VS. Common Core, you have ignored our pleas to exit Florida COMPLETELY from CCSSI, not just in name only!! It has been insulting to us for you to say that we now have Florida Standards and the Florida Assessment. Yes, I have had a lengthy conversation with Kim Mac. and she stated that the NGSSS were so close to CCSSI is the reason they can be called Florida Standards. Go with the proven NGSSI!! You can make that change, before the election with a stroke of your pen! (11,000 CCSS 99 Florida'tweaks' = CCSSI)We are against the hideous PUSH of this testing into the 1st year of complete CC implementation; we are not against you. However, we feel that YOU are deceiving the citizens of Florida!!

There are four votes in our house for you IF you get rid of Common Core. We are torn but will vote for whoever gets rid of it first!

Governor Scott, I feel the exact same way as Ms. Debbie Higgenbotham; I homeschool my child as well and my child will NOT step foot into ANY secondary public education program in Florida until we get rid of CCSS or whatever name the elite who are pushing for it want to call it next.

Gov. We are not planning on supporting you for re-election unless you do something about CC Testing.Pres. John Lacquey