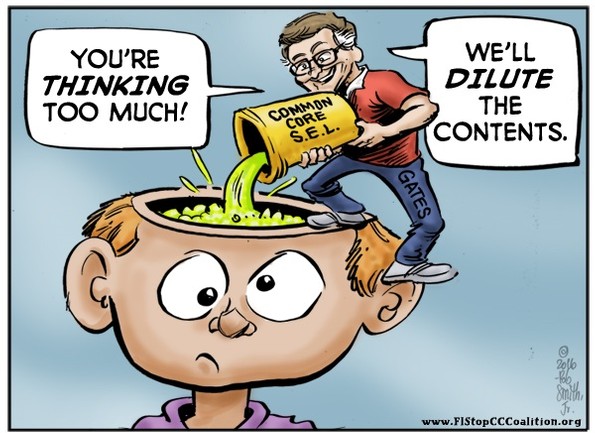 In the recent analysis of the DeVos nomination, it was mentioned that T74, a DeVos Family Foundation funded website published a critique of Jane Robbins's and Dr. Effrem's Federalist article warning of the dangers of social emotional learning (SEL) and that the author's employer had connections to many pro-Common Core and SEL groups:


The T74, a pro-Common Core education blog funded by the DeVos Family Foundation carried a post attacking the Federalist article written by Jane Robbins and myself as the "journalistic equivalent of yelling 'fire' in a theater" without substantively answering our concerns. The author works at Bellwether Education Partners, whose  partners include (surprise, surprise) DeVos' PR [Philanthropy Roundtable], Bush's FEE [Now called ExelinEd], and the Gates Foundation, all major supporters of Common Core and of SEL.
Here is an extensive excerpt of the rebuttal to that misguided critique published in the Federalist today:


In response to our recent article in The Federalist exposing the dangers of so-called social emotional learning (SEL), Allison Crean Davis argues that parents have nothing to fear from governmental monitoring and manipulation of their children's psychological states. Writing for a new organization called The 74 (funded by the DeVos Family Foundation), she urges that Americans wait for the "iterative march of science" (no, we don't know what that means either) to help us figure out the best way to implement and measure SEL in schools.

At the outset Davis likens SEL to Common Core: a "promising, well-intended initiative" that should be given a chance to work. Now there's a comparison that will ease parents' minds.

It's also interesting that she wants education to be more like medicine, yet bemoans the fact that benighted parents didn't wait for the "research" to come out on Common Core before opposing it. If the Common Core scheme had followed the pattern of medical research, the standards would have been tested on small groups of students and, if effective, only then would have been offered to a wider population.

Instead, untested, academically inferior, developmentally inappropriate, and psychologically manipulative standards were foisted on the entire nation mostly by unelected officials flying blind. Think what families and teachers and taxpayers would have been spared if proper testing had been done. And if Common Core's allegedly high standards were marketed as a drug, the FDA would have withdrawn it as misbranded snake oil, and doctors prescribing it would have been sued for malpractice.

Who Gets to Oversee Children: Parents, Or the State?

But back to SEL. Davis justifies the focus on SEL by pointing out what everyone knows: that people do better in work and in life when they have certain intangible qualities such as enthusiasm and integrity. The question, though, is who should be instilling and monitoring the development of such qualities in children: their parents, frequently assisted by churches and other faith communities? Or the government, through the schools, collecting information on how well children measure up and feeding it into the ravenous government data system?

Davis is firmly in the "government" camp. (So are the pro-Common Core and pro-SEL organizations working with her employer, Bellwether Education Partners, such as the Philanthropy Roundtable--chaired by Betsy DeVos--the Gates Foundation, and Jeb Bush's ExcelinEd.) Her article mentions parents only once, in connection with paraphrasing and dismissing our arguments. Instead, she emphasizes the need to focus on "science" uber alles.
"If education is going to mature as a discipline," she writes, "it needs to embrace an evidence-based, not ideologically based, approach..." An interesting way of putting it. Humanity has been educating children for millennia, but not until the twenty-first century does it have "science" to help it "mature." Were Aristotle and Thomas Aquinas not educated? Thomas Jefferson? What about the huge proportion of colonial Americans who read and understood complex tracts such as Common Sense and the Federalist Papers? Or the engineers who sent Neil Armstrong to the moon and brought him home?
How did they do that without having had SEL?

A 'Collective Mindset' Is the Last Thing We Want

The fact that education was remarkably more effective long before the "science" of education entered the picture should tell us something. But Davis will have none of it. "Research" says social emotional indoctrination may help children achieve more in school (i.e., score better on tests), and it's our duty to wait and see what the researchers tell us we should do. In the meantime, "[a] more patient, disciplined collective mindset will allow promising approaches to be tested and will shield innovations from suffocating dogma."
Parental determination to protect children from government intrusion into their psychological makeup is now "suffocating dogma." And a "collective mindset" is the last thing we should be developing when it comes to the individual thoughts and psychological make-up of innocent children.

Davis completely ignores the overarching problem: the government here exceeds its proper role and interferes with the most fundamental American right--the private right of conscience. Nor does she directly address the problem that SEL is based on enormously subjective, nebulous criteria, although she does mention that more "research" will sort that out.

The Government Should Not Dictate Children's Feelings

Davis apparently doesn't realize that even psychiatry, which is practiced by formally trained medical doctors, admits that "most psychiatric disorders lack validated diagnostic biomarkers, and although considerable advances are being made in the arena of neurobiology, psychiatric diagnoses are still mostly based on clinician assessment." So if even trained professionals admit there is no physical evidence for their formal diagnoses, how can SEL--as practiced by well-meaning but untrained personnel--hope to come up with research-validated opinions about the psychological make-up of children?
The article concludes with a very important question:
So Davis thinks we should exercise "self-management" and stop yelling "fire" in a theater. But when we smell the smoke and see the flames licking at the curtains, how long do we have to wait before we sound the alarm?
Please read the rest at Using Schools To Retrain Kids' Emotions--What Could Possibly Go Wrong Here? and share!
Florida Stop Common Core Coalition, Inc. Florida Stop Common Core Coalition, Inc.