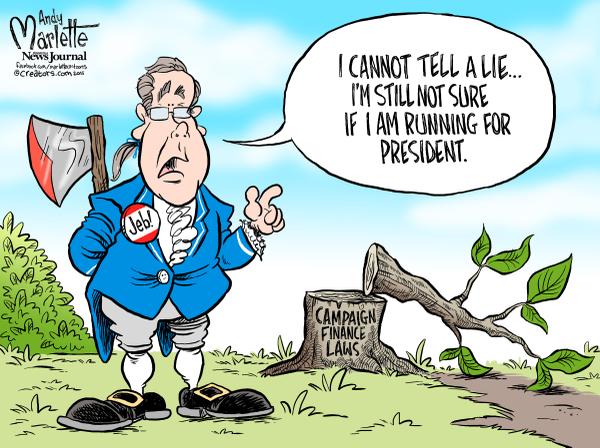 The wind may be leaving the sails of Jeb Bush's ship Air of Inevitability.  His big lead is eroding in poll after poll as parent and taxpayer outrage about his involvement in and undying support of Common Core and the accompanying invasive, punitive, and invalid tests. As other candidates truly enter the race, instead of pretending to be "strongly considering" it, there is more anger about his perceived skirting of campaign finance laws, the appearance of his continued iron fisted control of Florida Legislature and GOP, his testing policies that have metastasized to other states and to federal law, and continued scrutiny of his past financial dealings.

Adam Smith of the Tampa Bay Times said this about Bush and Common Core in his recent  article about how Jeb's claim to still be considering a presidential run so as to be able to skirt campaign finance laws and gather more money:


At some point this year, however, Bush may find his non-campaign campaign makes primary voters start to doubt his honesty as much as they do his positions on Common Core and immigration reform.

That was a follow-up to Smith's note about Bush's Common Core position in relation to Florida Senator Marco Rubio's now officially announced run:

He [Rubio] must have sufficient money to communicate. This may be the first election in which billionaires pick a presidential nominee and that's good news for Rubio. Bush is likely to raise far more money than any other Republican candidate, but he faces so much hostility and skepticism in the base due to his last name and his support for Common Core education standards that he may need all that money.

During that speech, Rubio also took a shot at Bush's air of inevitability

RUBIO: I've heard -- I've heard some suggest that I should step aside and wait my turn.
AUDIENCE: No. It's your turn.
RUBIO: But I cannot. Because I believe our very identity as an exceptional nation is at stake, and I can make a difference as president.

And later Rubio subtly took a shot at his last name:

And we're never going back. You see, we American are proud of our history, but our country has always been about the future, and before us now is the opportunity to author the greatest chapter yet in the amazing story of America, but we can't do that by going back to the leaders and ideas of the past.

Here are some more examples of why many voters are skeptical of Jeb Bush:

In an apparent effort to bribe his way to the nomination, Jeb Bush Makes Strategic Donations to GOP Lawmakers, State Parties

According to this article, it seems that Emails Show Jeb Bush Coordinated With Florida Legislature for Favorable Primary Date The Intercept

Michele Malkin and Glenn Beck review Jeb Bush's crony capitalist connections with the likes of Pearson and the Gates Foundation to impose a nationalized education system.

Here are some examples of recent polls and focus groups showing that voters are not buying the educational and other political snake oil that he is selling:

Overall, according to this recent graph based on a March NBC/Wall Street Journal poll: 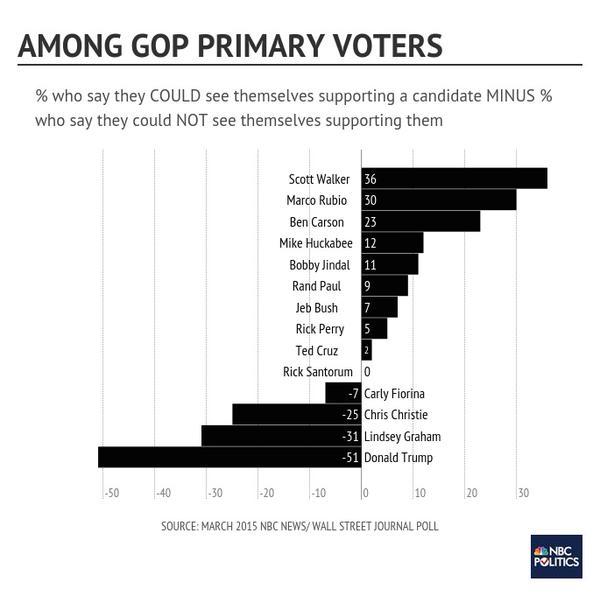 As you can see from this chart based on our March 2015 NBC News/ Wall Street Journal poll, Walker has the highest net support, meaning that the most GOP primary voters say they COULD see themselves supporting him rather than saying they COULDN'T see themselves backing his candidacy.

Rubio comes in a solid second. Rubio's home state rival, Jeb Bush, does a little bit better than breaking even.

Wisconsin Gov. Scott Walker is looking very strong, leading with 24 percent support. That's 10 percentage points higher than the second-place Republican, Texas U.S. Sen. Ted Cruz. And what's most impressive is that Walker was only at  percent when PPP surveyed New Hampshire voters back in January.

Rand Paul is third with 12 percent, and Jeb Bush comes in fourth with just 10 percent support. Marco Rubio and Chris Christie follow with 8 percent. Mike Huckabee and Dr. Ben Carson are at 7 percent. Rick Perry is at 4 percent...

...Bush continues to face some early skepticism from conservative voters. His overall favorability spread is only 41/40 among New Hampshire voters, and among voters who identify themselves as "very conservative" he's actually on negative ground at 34/45. Only six percent within that group say Bush is their first choice to be the Republican nominee.

According to this Bloomberg New Hampshire focus group, the idea of Bush as the front runner engendered laughter and not a single one of that group would support him.
Florida Mason Dixon poll reported 4/17/15 as discussed in Sunshine State News Rubio Catches Bush

The former governor continues to lead the field of potential 2016 candidates with 24 percent. That's 9 percentage points more than the next candidate in Florida, Wisconsin Gov. Scott Walker, who comes in at 15 percent. Marco Rubio is a close third with 12 percent.

However that's an 8-point drop for Bush since the last time Quinnipiac polled Florida voters two months ago, when he topped the field with 32 percent of the vote. (Emphasis added)

"Bush has a lead over the field in his home state of Florida, but it's not anywhere near insurmountable, " said Peter A. Brown, assistant director of the Quinnipiac Poll.

Even the vaunted big donors that are supposed to be part of the "shock and awe" campaign to lock up support with the big money are not, according to the New York Times, all that thrilled with Bush:

Three months into what allies once confidently described as a "shock and awe" drive to overcome his rivals and dominate the Republican presidential field, Jeb Bush's early campaigning looks like the juggernaut that wasn't...

...For all the Republican "bundlers" who have signed up to raise money for Mr. Bush, others remain uncommitted or are hedging their bets by aiding more than one candidate. Some are privately chafing at what they view as the Bush camp's presumption of their loyalty.

Bush may have thought that his last name and all of the millions of dollars in donations he is receiving would give him an unobstructed path to the nomination, but he did not anticipate the wrath of millions of mama and papa bears and teachers not ready to yield their children and students to the government/corporate education reform that he is peddling. 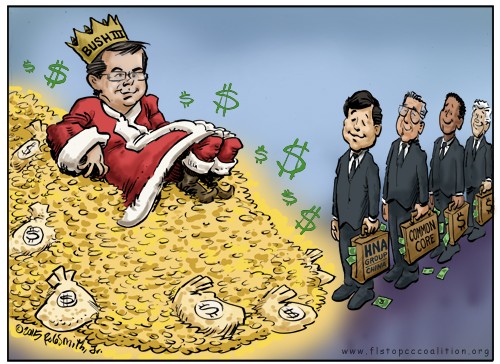