The report was based on how well candidates by their statements and actions have answered three questions:
1.) Have they spoken out and acted against Common Core?
Statements opposing Common Core must acknowledge that the standards are of low-quality, fail to meet the expectations of high-performing countries, and contain language that controls the curriculum and instructional methods used in the classroom. Recognition of these deficiencies is central in determining whether a candidate's actions have been a sincere effort to replace the Common Core with high standards or to simply rebrand it under another name.

2.) Do they understand and have they made a specific commitment to protect state and local control of education from further federal intrusion?
In particular, we are looking for candidates who understand how the federal government intrudes onto state decision-making and who advocate for structural changes to prevent such intrusions. Moreover, the candidate must understand that the intended division of power between the federal government and the state is meant to ensure that people can shape state and local policies. He must understand how the breakdown of that division destroyed the safeguards that could have, and likely would have, prevented Common Core.

3.) What efforts has the candidate made to protect student and family privacy interests against the rising demands of industry and central planners for more personal student data?
Such interests include the right of parents to control what type of information is collected (e.g., social and emotional information, behavioral history, family information), who may collect such information, and with whom that information may be shared. Reliance on the Family Educational Rights to Privacy Act (FERPA) to protect student data is no longer a sufficient argument for calls against expanding student-data systems. A 2009 executive order allowed regulatory changes to be made to weaken the law, such as the removal of language requiring parental consent, without Congressional consent. A candidate must understand how this is symptomatic of a larger issue: the federal executive's continued abuse of the intended system of governance in order to push its favored policies and practices into the states.
Here are the grades for each of the candidates and links to a full explanation of how they were graded by APIA along with some FSCCC commentary for each one.  We will start with the Florida candidates:

F  ... Jeb Bush The plethora of information on this website and our Facebook page should leave no doubt that former Governor Bush's failing grade on Common Core is very well deserved.  Our GOP debate analysis, the news that he worked closely with the Obama administration to spread the cancer of Common Core, his admission that the Florida Standards are basically a rebrand, and our rebuttal to his recent foundation speech are just some examples.  His most recent efforts to temper his support by saying that he opposes federal involvement and calling Common Core "poisonous" are not believable as shown by the general panning of his debate performance and his falling poll numbers in recent CNN and Quinnipiac polls since that debate.  Bush's polling problems are likely worsened by his stance on immigration, his personal and family history of involvement in organizations that support Planned Parenthood, and his most recent statements that the NSA should do more spying on Americans. 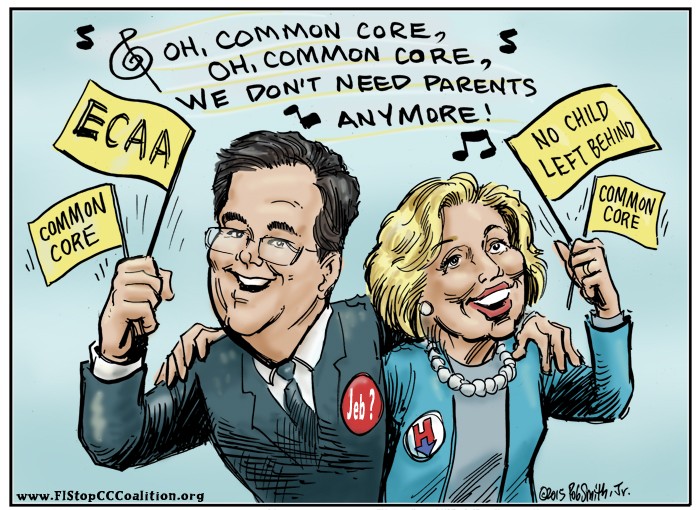 B- ... Ben Carson Dr. Carson believes strongly in local control of education and school choice. He has spoken against Common Core, but needs to expand his research, understanding, and speaking about this vital issue.  He has not had the opportunity to actually take action against the standards, for student data privacy or for a smaller federal footprint in education yet. Given his experience in medicine, it is quite likely that he does understand the importance of privacy.  He also will need to understand the dangers of school choice programs that require the state (mostly Common Core) tests for "accountability" purposes.

C  ... Marco Rubio The Florida senator has consistently been against Common Core in speeches and the first debate when he has had the chance to discuss the issue.  He is also to be thanked for voting against the final ECAA/No Child Left Behind rewrite and for Senator Cruz's amendment on testing state sovereignty.  Let us hope he improves in the area of privacy by pulling back on his "Know Before You Go Act" which will require a boatload of student data mining and that he supports Senator Vitter's bill privacy bill.

C  ... Mike Huckabee As described in our debate analysis and the cartoon below, former Arkansas Governor Huckabee's positions on Common Core have been problematic.  Let us hope that his current fervent opposition to Common Core is sincere and more than just words.  Given his calls in 2013 to rebrand the standards as Governor Scott did in Florida, we think the C grade is extremely generous. 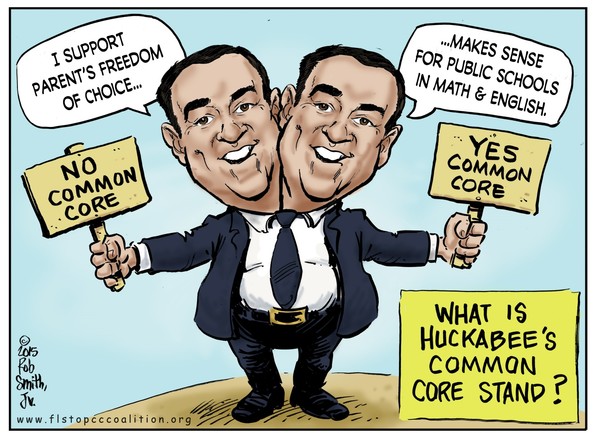 Now on to the rest of the field, beginning with the winners Senators Ted Cruz and Rand Paul:

A- ... Ted Cruz FSCCC would add that Senator Ted Cruz has been rock solid on his opposition to Common Core and has never wavered.  One does not need to parse his statements. We also appreciate his vote against ECAA, the Senate No Child Left Behind rewrite, as well as his amendment attempt to that bill to return testing decisions to the states. We hope that he considers co-sponsoring Senator David Vitter's Student Privacy Protection Act or draft some other student privacy protection legislation that includes protection against psychological profiling, which we believe would turn his excellent A- grade to a stellar A+.

A- ... Rand Paul FSCCC also appreciates Senator Rand Paul's clear, consistent opposition to Common Core as well as his efforts to defund the US Department of Education (2012 S. Con Res. 42), his past work in other bills to protect children from psychological profiling, and realization of how bad ECAA was after initially voting for it coming out of the Senate HELP committee on which he sits by voting against the final  bill and trying to amend it regarding testing. He too could improve his great grade by expanding his previous work on student psychological privacy to not just ask for consent, but to prohibit this extremely invasive, unconstitutional and unethical activity.

B+... Bobby Jindal Governor Jindal's opposition to Common Core has been strong and consistent after initially supporting the standards and his words have been matched by actions, which we submit have helped the citizens of Louisiana and further isolated Jeb Bush on this issue.

B  ... Lindsey Graham Senator Graham has also acted in opposition to Common Core, but needs to expand his actions, clarify his opposition and really come strongly out against any conference committee report on the No Child Left Behind rewrite that will cement Common Core, especially since he did not vote on the Senate bill itself or any of the amendments and support Senator Vitter's privacy bill or something equally strong.

B  ... Rick Perry Former Texas Governor Perry has always also been a strong opponent of Common Core as governor of one of the few states that rejected it and Race to the Top funds from the beginning.  His grade would probably be an "A" were it not for the student data sharing bill that he signed.  Let us hope he clarifies that issue and talks further about how he would devolve power to the states and districts and protect data and psychological privacy.

B  ... Rick Santorum Former Senator Santorum (PA) has fairly solid record on education.  He voted for No Child Left Behind while in the Senate but has admitted that that as a mistake.  He did speak against Common Core when running for president in 2012 and has continued that effort in this campaign, including the very important effort of speaking against the very poor quality of the standards. It is hoped that he will continue and expand on that as well as flesh out what he would do to protect student data and psychological privacy.

B- ... Donald Trump The New York celebrity tycoon has consistently spoken against Common Core from the beginning of his 2016 presidential aspirations.  As described by APIA, he will need to get more specific on discussing Common Core's academic inferiority, how he will work against the standards, federal interference in education and student data mining.

C+... Carly Fiorina Mrs. Fiorina was highly complementary of Race to the Top when she ran for the US Senate in California in 2010, the first year that the Race to the Top grants were offered and the year that the standards were being written.  The standards were not even complete until sometime during May of that year and approved by many states by an August deadline in order to get points for the grant competition.  So while this statement from her senate campaign website is disappointing, it is not at all surprising given her big business background and the date of 11/4/09 that some of this statement was put together, which was well before the standards were released.  She has since opposed the Common Core in her presidential campaign after learning what the standards are and what they do.  Since she has not held elected office, she will have to clarify her positions as the campaign continues.

D+... Chris Christie While happy that the New Jersey governor is now opposing the standards, he is quite recent to that conversion, which some say is politically motivated, and he was quite disparaging of parents who had concerns.  We hope that he continues to improve, but now he has to contend with his corporate elite donors' concern about his change of heart.

D+... Scott Walker The Wisconsin governor has done well on certain aspects of education, but his history with Common Core as described by the parents and citizens of the Badger State is at best complicated and at worst disingenuous.  Walker's Department of Education also accepted Race to the Top Early Learning Challenge grant money and its website admits their pre-K standards are aligned to Common Core.  It is outrageous to be expanding and imposing Common Core on young children.  We strongly agree with the grade that he received with APIA.

F  ... John Kasich The Ohio governor remains arrogantly and militantly in support of Common Core.  He disparages parents and seems to be acting as a foil to Jeb Bush who is attempting to appear slightly more conservative in his continued stubborn support and willingness to "lose the primary in order to win the general election." Kasich and Bush differ very little from Hillary Clinton on this critical issue.  Kasich is only doing well in his home state of Ohio. 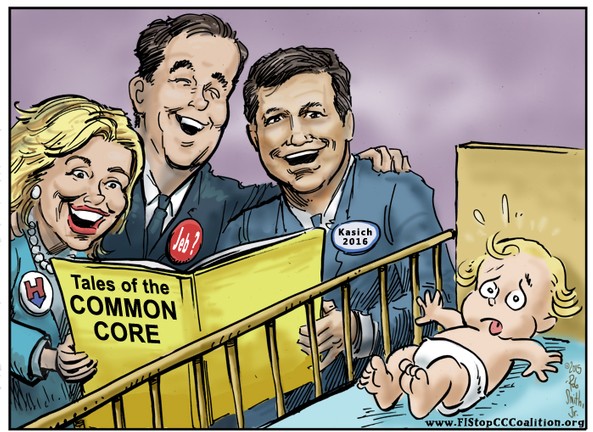