October 31, 2014 Karen Effrem
Former Governor Jeb Bush's foundation and all three gubernatorial candidates have put out statements on high stakes testing. These tests are related to the implementation of Common Core, renamed as the Florida Standards.

As the tsunami of opposition to the developmentally inappropriate, invasive and expensive high stakes testing scheme associated with Common Core continues to build, Jeb Bush's foundation is running for cover and trying to back off some of the tests.  Executive Director Patricia Levesque wrote a letter posted on Bush's Foundation for Excellence in Education website that first tries to defend all of the testing:


Schools have the freedom to teach however they think is best. But standardized tests ensure schools teach all children to the same high expectations. Without them, history shows some schools set lower expectations for some students. And we shouldn't have a system that discriminates. (Emphasis in original) 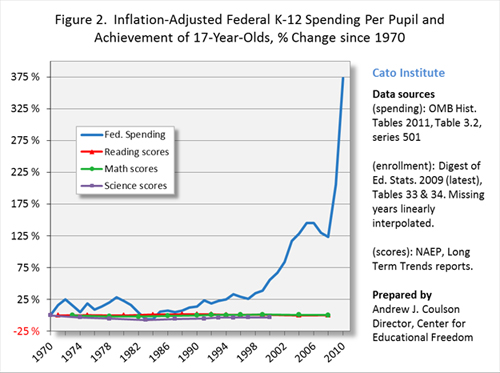 Other research by Neal McCluskey of Cato  reveals that the US does both better and worse on international comparisons than nations with national education standards. Research by Dr. Chris Tienken of Seton Hall University shows that the US leads the world in innovation and entrepreneurialism without national standards.

Levesque later admits that excessive testing is a problem and throws a bone to parents:


While I strongly believe in tests, I agree there is such a thing as too many tests...Tests need to serve a purpose and not simply take up valuable classroom time.  It's refreshing to see that some districts are reviewing their local tests. And we would encourage the state to also do a review to see if there are duplicative tests that could be eliminated. (Emphasis in original)

In his campaign plan, Governor Scott has promised just such a review of the testing scheme should he be re-elected:


Governor Scott will direct the Commissioner of Education to conduct a thorough and comprehensive investigation of every standardized test that school districts are requiring their students to take.

Charlie Crist infers that there are testing and implementation problems with Common Core:
And we must give teachers the flexibility to teach. Testing should exist to make sure kids are learning and growing not as a substitute for teaching.


When it comes to curriculum, Charlie supports the Common Core standards, but he wants to work with parents to make sure they are implemented in a way that works for Florida schools.

Adrian Wyllie is straight forward about the dangers of and his opposition to Common Core related tests and standards: 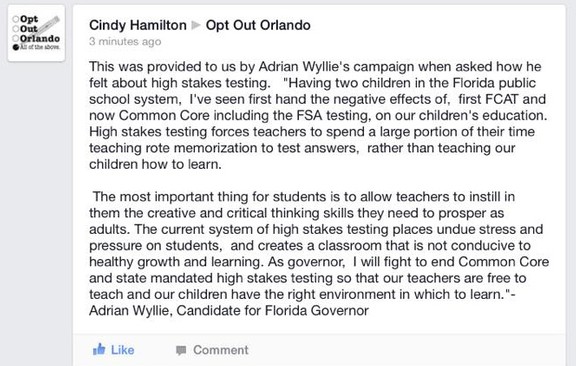 This issue of testing based on the very controversial standards and the associated data collection will be an enormous issue in the next legislative session regardless of who wins the governorship and may well also be a factor in the Republican presidential nomination.
Florida Stop Common Core Coalition, Inc. Florida Stop Common Core Coalition, Inc.